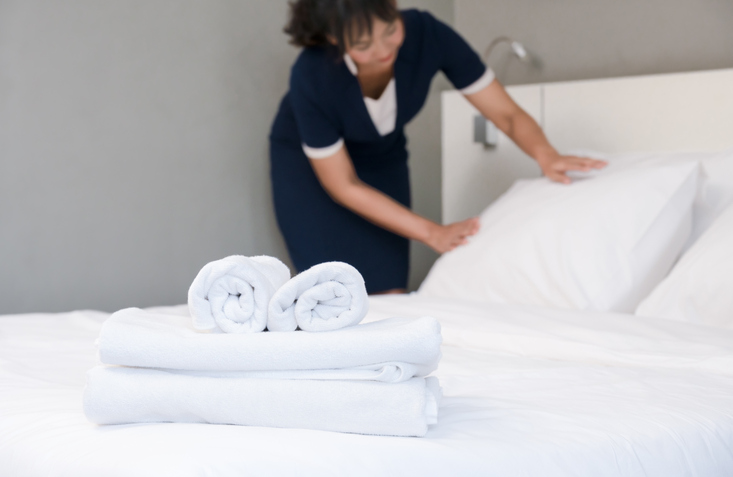 The Hotel Worker Protection Ordinance, proposed by UNITE HERE Local 11 to require, among other things, daily room cleaning, panic buttons, limitations on overtime and housekeepers’ workloads, and increased wages, was passed by the Los Angeles City Council on June 28, 2022, rather than allowing the issue to be decided via a Ballot Initiative by City voters in November. The law will take effect 30 days after Mayor Eric Garcetti’s anticipated approval of the Ordinance.

The Ordinance is similar to ordinances passed by the Cities of West Hollywood, Santa Monica, Long Beach, and Oakland.

Key portions of the Ordinance for hotel employers located in the City of Los Angeles include:

Personal Security Devices
Hotels must provide a personal electronic security device, commonly referred to as a “panic button,” to each hotel worker assigned to a guest room or restroom facility where other hotel workers are not assigned to be present. Hotels with 60 or more guest rooms must have a designated and assigned security guard to receive panic button alerts and provide immediate assistance in the event of an alert. Hotels with less than 60 rooms may use a hotel manager or supervisor to fulfill this requirement, but must provide specific training to the assigned manager or supervisor.

The Ordinance provides rights to hotel workers who report violent or threatening conduct, including paid time off to report such conduct to law enforcement, and sets a strict retaliation prohibition against any hotel worker who activates a personal security device and leaves the work area due to a perceived threat or emergency.

A notice must be placed on the back of each guest room door and restroom regarding the personal security device requirements.

On an annual basis, hotels are required to provide training regarding the Ordinance’s personal security device requirements.

Daily Room Cleaning
The Ordinance effectively guts popular hotel so called “green” environmental programs and financial incentives for hotel guests to forego daily room cleaning, essentially mandating daily room cleaning absent a guest’s opt-out of such service, which opt out must be “without solicitation by the hotel.”

Voluntary Overtime
Hotels cannot require a hotel worker to work more than 10 hours in a workday unless the hotel worker provides written consent and is advised of their rights in advance.

Recordkeeping
Hotels must maintain records with detailed information relating to compliance with the workload limitations, overtime hours worked, written overtime consents, and training, among other things.

Enforcement
The City or any aggrieved person may enforce the Ordinance by a civil action and recover attorneys’ fees and costs for doing so. Substantial penalties, similar to those available under the Private Attorney General’s Act (“PAGA”), apply for violations of aggrieved person’s rights and failure to maintain records, as well as treble damages for willful violations.

Collective Bargaining Agreement Waiver
The Ordinance states hotels may obtain a waiver of certain of the Ordinance’s requirements through a collective bargaining agreement if the waiver is expressed in clear and unambiguous terms. Even though the Ordinance (and comments by Local 11) create the impression that such waiver is pro forma, in practice in other cities with similar ordinances, that has not been the case. Hotel employers should count on the reality that the Los Angeles City Council, through the Ordinance and its express waiver requirement, has provided Local 11 with a powerful new cudgel to wield against unionized employers who seek a waiver of the Ordinance’s provisions through bargaining. Additionally, despite bargaining rules under the National Labor Relations Act, which should allow hotels to bargain to lawful impasse over such waivers and effectively implement them, the Ordinance prohibits this and bars unilateral implementation even after bargaining to impasse.